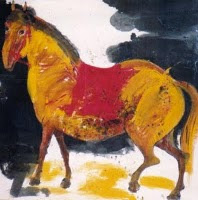 Our America knows more by being old than by being ours. Out of 200 years of miseries and greatness, at least we have the experience of what has worked and what hasn't.

Receiving the invaders as if they were gods.

Giving in to abuse: our surrendering forefathers were annihilated, mistreated, enslaved and deprived of their culture anyway.

Resisting imperialist invasion separately, enabling the invaders to subdue us people after people, culture after culture, region after region.

Offering to collaborate with the invaders: the Totonaca and Chichimeca indians helped Cortés against the Aztecs, the Guatemaltecos, helped Pizarro against the Incas, the Arawacs supported Losada against the Caribes, Americans served as executioners for the Empire against other Americans and afterwards they were enslaved, subjugated or exterminated.

Prolonging our internal feuds and long-standing quarrels in the face of the enemy: Háscar against Atahualpa, Moctezuma against Cauhtémoc; these were the most effective agents for the conquerors.

Leaving for centuries in the hands of foreign empires, the administration of our lands and subsoil, our natural resources, our economy, our finances and our politics.

That before and after the abuse, we allowed some of our originally equalitarian societies to degenerate into caste systems with economic and political hereditary privileges.

Adopting the culture of the oppressor hoping to gain recognition as equals and instead ending up being ridiculed as bad imitators or forgiven as picturesque.

Judging ourselves by the standards of the enemy, measuring ourselves according to the table of values of the genocidal assassin.

That after 300 years of an oppression that seemed eternal we took our destiny into our own hands.

That we would defend by force the right to be ourselves, something always denied to us by violence.

That we finally understood that the battle against the Empire is a continental venture and that there cannot be any independent parishes, villages or little republics.

That all of the Independence projects, from Miranda's "Incanate", to Bolivar's Anfictionic Congress, contemplated a total union of our America in one great confederation or block of hemispheric proportions.

That all the rebel movements would help one another in solidarity from the Rio Grande to the Patagonia.

That we would use against the Empire its most advanced weapons and ideas as well as the common linguistic and cultural wealth it imposed.

That we would call all the oppressed classes and castes to programs of social and economic justice.

That we would reserve to perpetuity our subsoil and the control of our natural resources in an undivided and inalienable way for our fledgling republics.

That we would confiscate without compensation or contemplation the main wealth to date, which was the territorial wealth, for its redistribution according to services rendered to the revolutionary cause.

That we would proclaim in an unrestricted way our Sovereign and inalienable power of authority to give ourselves our own laws and to interpret them and apply them through our own courts.

That Bolívar himself rejected the United States pretension to submit to foreign arbiters and judges any foreign claims that could affect our public interest.

Separating state and religion and to submit the latter to the former through Patronage.

Substituting one Metropolis for many.

Abandoning Independence principles of integration and allowing five Viceroyalties and five Captaincies-General to break down into more than twenty five countries.

To initiate our independent life with an overwhelming public debt whose negotiations enriched the ruling classes and threw the people into the most sordid of poverties.

To initiate our autonomous existence with free trade agreements failing to protect our own products while the Metropolis protected its own.

To limit our economies to the production of a half a dozen products of dubious demand in external markets, rather than manufacturing 200 products essential to our internal markets.

To attempt to preserve the caste system maintaining slavery, serfdom of the indigenous people, ethnic and racial discrimination as sources of hundreds of armed rebellions.

To delay or deny the exercise of rights once offered to the very classes and groups that ensured our independence with their blood and brought our economy to life with their labor.

To allow the loss of the "incanato" and Anfictionic Congress projects only to accept the false integration of "Panamericanism" promoted and enforced by the United States.

To tolerate in disunity the insolent interventions, invasions and blockades carried out by Great Britain, France, Holland, Germany and the United States.

To exempt multinational companies and foreigners from tax collection, through treaties against double taxation and raise local taxes to pay for what the aforementioned do not cover.

To dare against the empires.

To think with our ideas, our values, our own heads.

To conquer through violence the exercise of rights denied to us through brute force.

To once again mobilize the oppressed classes and put into effect social vindication programs for them.

To reject the integration as established by the empires, and to set in motion our own social programs.

To reject the presence of foreign military bases on our soil and to denounce, isolate, or expel those already in place.

To retake control of our natural resources as well as of the industries necessary to exploit them.

In our America, to be ourselves.
Publicado por luis britto garcía en 11:15 No hay comentarios: 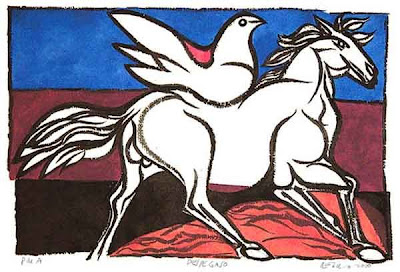